How Your Eye Works

Much like a camera, the eye works by focusing light rays. Light entering the eye first passes through the transparent cornea, which has about 60 percent of the light-focusing ability of the eye. Light rays are then focused by the lens to make a clear image on the retina at the back of the eye. The image formed by the retina is transmitted to the brain as a series of electro-chemical impulses via the optic nerve.

Think of the eye as a camera. The lids are the lenscap and the iris is the f-stop or diaphragm which lets in more or less light through the lens which focuses light on the retina. The retina is the film in the camera. The retina is connected by a coaxial type of cable called the optic nerve which travels to the brain. We’ll refer to this camera example again later. 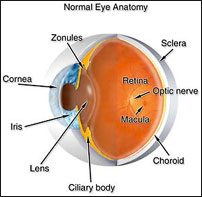 Cornea Anatomy of The Eye

The cornea is the clear dome-shaped front window of the eye, which provides 60 percent of the light-bending (focusing) power of the eye. It is the only tissue in the human body which is transparent to light. In its normal state, the cornea has no blood vessels. Epithelial cells coat the outside of the cornea, providing both a smooth and a water-holding (tear) surface to allow clear vision. The lids not only are windshield wipers but, by spreading the tears around, also serve to keep the eye from completely drying out.

This is the muscular outer coat of the eye which maintains the eye’s round shape. It is white and opaque to light. Covering the sclera and the inside of the eyelids is the conjunctiva, which is a clear thin membrane containing mucous-producing cells to keep the ocular structures moist.

Within the globe of the eye, situated just behind the cornea, is a usually-clear, semi-solid structure called the crystalline lens. This lens is enclosed in a thin membrane (lens capsule) which is itself connected to the muscular part of the ciliary body by another membrane (zonule). Because it is the source of nutrient fluid, the ciliary body is extremely important to the health and function of the eye. The lens of the eye-composed of the capsule, cortex and nucleus is held under tension by the zonular membrane and thus is made thin.

In its relaxed state, the eye is able to discern distant objects clearly. As an object gets closer, the eye must change its light-bending power to accommodate the nearness of the object. How does this automatic focusing occur? The ciliary muscles are so arranged that when they contract, the zonule relaxes, allowing the lens to relax and become thicker in the center. This increased thickness bends the light more so that nearer objects are seen more clearly. The anatomical term for this act of focusing is called accommodation. It is the gradual loss of the property of accommodation that causes a loss of the ability to see near objects. This is called presbyopia, which occurs for most people in their mid-40′s. When this crystalline lens turns cloudy from age or disease, it is called a cataract.

Overlying the lens is the iris whose purpose is to control the amount of light entering the eye. It’s a structure made of thin elastic tissue with an opening in the center, surrounded by a circular muscle called a sphincter. The structure is the iris; the opening is the pupil. The backside of this tissue is composed of tissues containing brown pigment which act to absorb light and prevent its scattering within the eye. 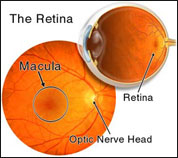 Coating the back of the eye, covering the sclera, is a thin layer of nervous tissue-an extension of the optic nerve-called the retina. The retina is analogous to the film of a camera. With its 10 layers, the retina is responsible for gathering light focused upon it by the cornea and lens. It converts the light to electrical signals that it amplifies and sends on to the brain for interpretation and construction of images. The brain actually does the seeing-not the eye itself.

The retina lies on a black membrane, which overlies a very leaky collection of blood vessels called the choroid. The choroid supplies the retinal sensory cells with nutrients and oxygen while the retinal arteries and veins, coming from the center of the optic nerve, supply the rest. The transfer of nutrients to the sensory cells is done by active transfer across cell membranes; that’s why vision deteriorates when the retina is detached and no longer in contact with the choroid.

The retina is divided into several areas, the most critical the macular area. The macular area is responsible for daylight and color vision and contains specialized cells for that purpose. The very center of the macula-the fovea- is where best vision occurs. The rest of the retina provides side vision or field, and does most of the seeing at night.